I have to admit, I found Kiersten on twitter after I’d read Demon Possession. Yup, I fan-cyber-stalked her. She had books about demons, and I was writing about my book about daemons — and we bonded, mostly over our shared sense of humor. She used to work as a graphic designer which I found out when I asked her who created her amazing book covers. She did them herself, the multi-talented gal! (Which didn’t help me find my cover artist, but it led to some fun conversations.)

Kiersten’s stories are action-packed sci-fi romance filled with sassy characters, which you don’t see every day. She was kind enough to take a break from working on Demon Untamed (Book 4 in the Shadow Quest Series to answer some questions for us. Enjoy! 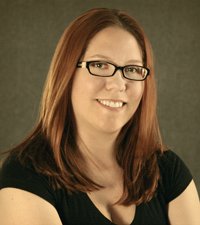 I love throwing my characters into unfamiliar situations where they are completely out of their element and therefore must change or adapt if they hope to survive. In other words, dropping them in uncharted territory with a “sink or swim, baby” attitude. Sometimes I feel like a kid with a magnifying glass hovering over an ant hill. Muwahaha!

So like most writers, you coddle and pamper your characters…hahah. Yeah no.

When I finish a manuscript, I HAVE to take a little time out from writing. Usually, I’ll find a new romance series to addict myself to, hit up a few movies, or try to find a new way to cook chicken. The latter generally results in a sad, sad half burned chunk of meat that once resembled a chicken leg. I’ll figure that oven out one day.

I also enjoy PC and video games on occasion. The kind where you build up a city and then wreak havoc by bombarding it with natural disasters… hmm, me thinks a pattern is emerging. Suppressing evil laugh.

Not everyone can be awesome at everything! Give yourself a total pass on cooking. It’s cool you’re a gamer geek! I did not know this, and I only respect you more now. 😉

I’m a sucker for sweet wines. I mean literally…I suck them down like crazy. Moscato, white zin, white Merlot. If it’s sweet or fruity, I’ve likely had a bottle of it stashed in my fridge at some point. Got any suggestions?

If you like those other wines in your flavor profile include Vin Santo, Icewines, Tawny Ports, Late Harvest Gewurztraminers, Olorosa, Bual, Verdehlo, Malmsey, Barsac, and of course, a Sauterne. I mean, just throwing some ideas around, as your #winewhore. 😉

I’m a music lover too, and not all that picky…well, not as picky as most people. As I look at my Pandora line-up I see there is Tiesto, ATB, Silversun Pickups, Tangerine Dream, Death Cab for Cutie, Muse, and Flyleaf. Those are more on the chill side. I was recently turned on to Within Temptation. They provide me with intense music while I’m writing a dramatic scene.

Oh, I adore Flyleaf! I’ll check out the others. 😉

Well, I would have an army of vampire bunnies. Vampires: because they are strong and live forever (or at least until some Van Helsing jerkoff shows up). Bunnies: because their numbers could be replenished swiftly. And I would use them to smother my enemies with their incomprehensible cuteness.

Me to bunnies: “Attack!”

LOL, you said ‘jerkoff.’ Love the combo of cute + evil. No one will see it coming.

As your supreme overlord, I expect complete and utter devotion…to tacos. My word will be law and, as such, certain types of seafood will be banned because it offends my nose. Songs will be written in my honor (Afterward, the word crazy will be redefined to mean remarkable). Police forces will be comprised of catholic nuns, because those chicks are harsh! And we would all dress in Halloween costumes year-round because it’s fun…  I would be fair and altruistic…

I dig your style.

7) Who’s your favorite author? What about their work speaks to you?

Dr. Seuss… No, really. With only a few short words, he created morally deep and thought provoking material for countless children: Don’t invite trouble-making cats wearing ridiculous hats into your home. Don’t be afraid to try new things, green eggs and ham just might be delightful. Don’t step on that speck! You’ll destroy an entire civilization in seconds!

“I like nonsense, it wakes up the brain cells. Fantasy is a necessary ingredient in living.”
—Dr. Seuss

8) Tell me about the inspiration for your upcoming/current project.

As far as inspiration? I can’t really say what that might be. Only that I love paranormal romance and I love sci-fi, and I really wanted to mesh the two together. There’s so little sci-fi romance out there, don’t you think?

9) Finally, is there a flavor of ice cream you just don’t understand? One that, by all rights, simply should not exist?

I’m a plane old vanilla and chocolate kinda gal—rarely ever stray—but I’ve heard tell of a bacon flavored ice cream which makes me both gag and salivate at the same time. Two opposing reactions that would drive any overlord bonkers…

Here’s the cover for Demon Untamed, Book Four in the Shadow Quest Series, due out in 2013. 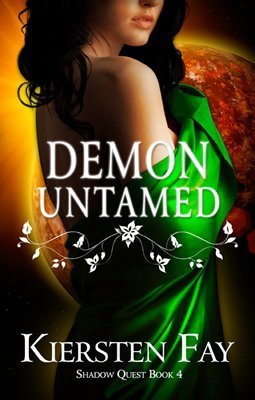 Get in touch with her through the following sources: