I met Steven Montano on twitter over a year ago and was impressed by his genuine personality. Unlike many author’s I’d met online, his life wasn’t perfect every second of the day. He shared his frustrations, breakthroughs, quirky humor, and noted each and every cup of coffee consumed online. In other words: he’s a real person. In a world of bots, he’s refreshingly real.

Steven also champions indie authors and the indie publishing experience. If you’re an indie author (or want to be), check out his blog and prepare to soak in loads of useful information.

But for now, check out his interview with my Rabble-Rousing self. Enjoy!

I write the stories I like to read: dark, gritty, characters facing impossible odds but never giving up even though everything seems to go against them.  Such is my life: such are my books.

I like fantasy, sci-fi, action, and dark stories with strong imagery, and my writing reflects those preferences.  My stories are terribly self-indulgent. ;D

This is what I like about your writing! And yeah, it’s something we have in common, that dark, edgy, tone. Keep it coming!

My wife Liberty and I sit down every night with a glass of wine and either shoot the breeze or keep up with our shows.  I also read comic books, plays RPGs, and exercise.

3) Speaking of wine, which one’s your favorite?

I like a good Shiraz.  Or Merlot.  Just nothing white.

I just made a 70+ song club mix. I like Gothic/Industrial music, especially stuff that crosses the Industrial/Synthpop/Rock categories.  I think this week my favorites are System Syn, Assemblage 23, Rotersand and Birthday Massacre.

They would enforce my will, keep the wine flowing, and entertain my children.

Absolute rule.  No provinces or governors or any such crap – those morons always get jealous and just want to rebel.  Mine would be a one-man party system.  ;D

It’s been a while since I rabble roused.  There were a few late-night downtown incidents involving Trick-Or-Treaters…but that was a long time ago.  These days, I’m more domesticated.

You know, if you’re going to rule the world, you’ve got to keep sharp. Just something to keep in mind. 😉

8) Who’s your favorite author? What about their work speaks to you?

China Mieville.  His prose and pure inventiveness just overwhelm me.  I also appreciate how he’s always willing to try new things.  Oddly, I’m not always a fan of his writing, but I have huge appreciation for him as an author, if that makes any sense.

My husband’s always raving about him too. Now I need to add him to my to-read’s list. Fabs!

9) If you could hang out with someone famous for a day, how would you spend the allotted time?

I wouldn’t mind hanging out with Joss Whedon or Erik Larsen (the guy who writes and draws my favorite comic book, “The Savage Dragon”), just to get a glimpse at how their creative process works.  I’d probably need to hang out with them more in a telepathic sense to really make that work, I suppose.

I need to know more about your telepathic hang-out methods. 😉

10) Tell me about the inspiration for your upcoming/current project.

Books 5 and 6 of the BLOOD SKIES series have taken a turn for the epic.  Where the first three books were more fast-paced and action-oriented, I feel like, starting with Book 4, I’ve slowed things down a bit, since the storyline has characters roaming from one end of the map to the next.  George R.R. Martin and J.V. Jones both had a hand in my deciding to shape the second half of the series like this. ;D

11) Finally, is there a flavor of ice cream you just don’t understand? One that, by all rights, simply should not exist?

I can’t stand mint.  Anything with mint in it should be banned.  (And, once I’m supreme overlord, that’s precisely what will happen.)

I completely back you up on the mint. It’s vile. My minion army will join yours, and together, they will destroy all mint ice cream! Bwahaha!

Check out Steven’s most recent book, Crown of Ash, in the Blood Skies saga. 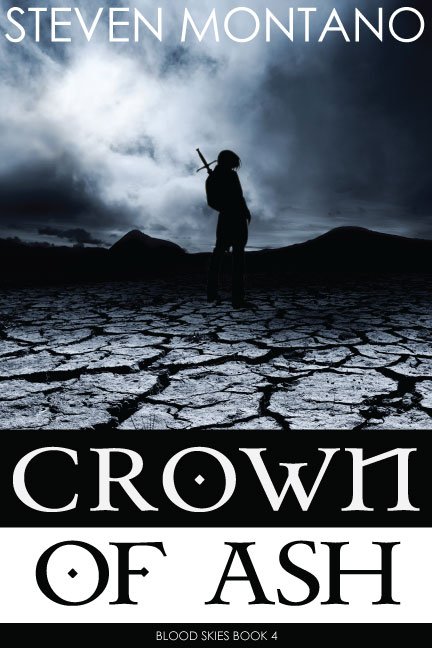 ric Cross and his team have been to hell and back, but their journey isn’t over yet.

Marooned in the remote criminal city of Blacksand, the only way for the mercenaries to get home is to help a local crime boss protect his territories from the Ebon Cities.

To complicate matters, Danica Black is also being hunted by The Revengers, a powerful band of corrupt prison wardens, while Cross himself is trapped in the Whisperlands, a realm of darkness controlled by a cadre of evil mages known as the Shadow Lords.

The team will battle their way through corroding wastelands and deadly vampire outposts, but even their considerable skills might not be enough to save them from the cruel machinations of the Shadow Lord’s mysterious master, a malevolent creature who has manipulated their destinies right from the beginning…

Return to the world of The Black in Book 4 of the BLOOD SKIES saga!

You can also find Steven on the web:

Add his books on Goodreads

Look him up on Amazon