Demon Inhibitions Blog Tour with Gary Starta - Candice Bundy
Today I have talented author Gary Starta guest posting. He writes a unique cross-genre blend of fiction including paranormal, sci fi, horror, and demon elements, so you can guess we get along quite well. I appreciate his reasoning below writing a blend of genres, as it mirrors my own thoughts on the subject. Without further ado, I’ll turn things over to Gary. 😉
* * * 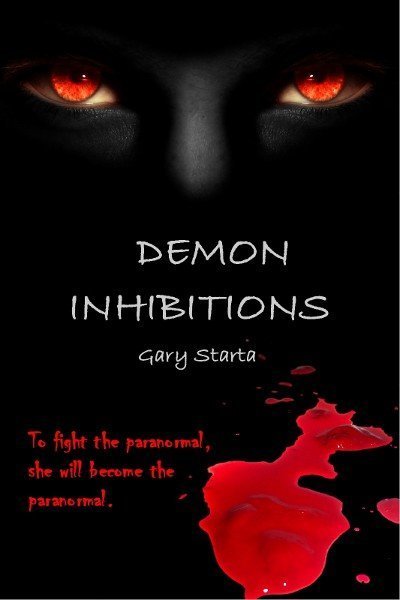 My new release, Demon Inhibitions, threads sci fi, urban fantasy, suspense, romance, horror and mystery.I usually anchor my novels in science fiction but find it fascinating and almost impossible not to blend these other genres into the mix. You could compare it to a meal. While there’s nothing wrong with eating a piece of fish by itself day after day you might find it more tasty to add broccoli (horror), rice (mystery), salad (romance), bread(fantasy) and dessert (suspense). To be more precise, Demon Inhibitions consists of:Sci fi: Agent Caitlin Diggs believes a genetically made soul stealer is responsible for recent murders.Horror: The soul stealer has escaped custody and crosses a parallel universe dragging Diggs with him via wormhole.

Urban Fantasy: Diggs is assisted by a Wiccan investigator and a succubus. In her parallel universe, demons outnumber humans and a preternatural branch of the FBI deals with their crimes.

Romance: Diggs enters an altered reality and a love triangle emerges. Her new boss Charles Grant is beyond handsome but the other version of her friend Stanford Carter is stirring feelings she never had for his alternate.

Hitches: Grant doesn’t know ‘his’ Diggs has been killed by the soul stealer. Alternate Carter has been turned into a demon. Would romance with Carter change her as well?

Mystery: Why is the soul stealer hell bent on eradicating a teen whose singing voice inhibits demon violence?

Suspense: Diggs faces the prospect that conventional weapons will not subdue her fugitive. Can her newly acquired paranormal abilities give her a fighting chance?

I’m sure we’ve all read great stories that brought some or all of these elements together. They usually get boxed under one category for sales purposes. Maybe someday a multiple-genre tag will be born. After all, paranormal romance is still a fairly young genre and is ever growing. Change does happen.

When she found I had visited Manners, Briana began scurrying about her house, scooping up a pair of scissors and a red candle. Before I could speak further, she came at me. I backed away from her in fright. Her placid face revealed nothing malevolent. But the shears were headed right for me. I tried to dive away from the contradiction. Who was the real Briana? The sweet woman who made cookies for me–or her shears wielding maniac counterpart now standing before me? She screamed not to worry. I heard a snip. I felt a strange sensation. Not pain. But something was no longer attached to me. It was a piece of my hair. She caught the floating lock in her hands as if it were a runaway feather.“It is very important we get to work, Caitlin.” Too stunned to process the weird moment, I could barely utter a groan.Then she explained how she must protect me. “He’ll surely make a visitation now that he has met you.”I tried to explain it was a good thing. I would probably get a vision of him and then I could determine his part in the slayings.She interrupted. “A visitation is what he’ll do to you. I don’t know how to break this to you but the cat judge is an incubus. He’ll surely come to you in your dreams. And in case he is our murderer, you’ll need a protection spell, pronto.”

I reminded her I carried a firearm. I had worked in the FBI.

“No earthbound weapons can harm the judge once he joins with you. An incubus enters your dream world.”

“How do you know this?” My tone grew edgy. She had obviously withheld knowledge of Manners. Maybe the two were friends or even lovers. And she just admitted an incubus could have committed these crimes without fear of being harmed or caught.

“I know things because I’m a witch, Caitlin. That explanation will have to suffice for now.”

“If you’re truly a witch, Briana, you must know he’s our best suspect.”
She had me there.

I settled in for the spell.

“I will create a mind shield for you, Caitlin Diggs.”

She began to chant, inviting me to join her.

“I call upon the helpful powers of my ancestors. Please protect and shield me from harm. By the ancient ancestral power, blessed be!”

Briana played soft Celtic music for me as we waited for the spell to take effect. I tried to distract myself with the lovely dulcet tones of harps and violins. It almost worked until my stomach rumbled–again. We never had supper. Briana was too intent on saving my ass. For what seemed hours we held hands waiting for the candle to burn down. I had plenty of time to drink in the ambience of the McFadden household. Floral print furniture and lacy doilies surrounded me. But most disturbing, a poster of Cher is depicting the actress as a witch in the film Witches of Eastwick, hung right before my eyes. When the candle finally expired I yawned and thanked Briana.

“Don’t thank me yet. The night is now upon us. We must return to your house if we hope to engage the judge.”

“No.” She paused to smile. “You could have twenty police armed to the hilt and he’d still come. Nothing from the waking world can harm him.”

I muttered something unintelligible even to me.

“I’ll be in the next room to supervise so to speak. When he comes I’ll sense it. I will then cast a binding spell so he can’t attack you – or worse, drain you. Now the spell won’t last indefinitely so you won’t want to waste time with small talk. Hopefully you’ll be able to determine his innocence or guilt in your dream.”

I had once interrogated an evil man named Crowley in a dream state. It didn’t go so well. But at least he didn’t threaten to harm me. Maybe he couldn’t. I still don’t know; but I was sure of one thing if the judge threatened me in any way I would defend myself. I didn’t care what Briana said about the dream and waking worlds. I went to bed packing a handgun.
~ * ~
A full moon bathed my bedroom in bluish haze. It kept my eyes from closing. Normally I would have drawn the curtains on the nocturnal intrusion, but tonight I was hosting so to speak. I felt I was setting a better trap or “invitation” to Manners if I left the light on. Briana would have probably scolded me if she were capable of listening to my silent ranting. She had explained to me several times Manners would not be traveling via car, plane or broom for that matter. His appearance would be completely ethereal to all waking humans. He would meet me via an altered state of mind, in a dream or alpha state, where his thoughts and presence could transcend any physical traps an overly anxious former FBI agent (me) might feel compelled to set. It wouldn’t matter if I shined a lantern in my window or posted Rottweillers on around-the-clock guard duty, Manners would be oblivious to it. Briana stated this very emphatically, employing wild gyrating arm movements that nearly had me fearing she would turn me into a rat if I didn’t give her my undivided attention. So I sat and listened to her for an hour after we completed the spell. When my eyelids began drooping, she ordered me to bed. She took up residence in the adjoining guest room with Celeste. With a click of a doorknob, Briana could be at my bedside in seconds. But when I finally began to absorb the notion that Manners would not be using the front door to meet me, fear began to take hold. How would her presence help me? She could monitor my dreams all she wanted, but ultimately it would be up to me to break free of Manner’s paranormal grip-provided one: he was an incubus and two: he would still deem an appearance necessary to either protest his innocence or quiet my suspicions of him once for and all. My mind finally began to drift into that sleepy state where your thoughts start running into one another. How would I converse with him in the dream world? And would my gun be at my bedside in this dream? My brain felt like rubber. My eyelids finally shut. A faint hint of blue light seeped through them and then the next thing I knew…

“Who, what…what do you want?” I sat straight up and stammered as a presence took shape over my brass four-post bed. At least I determined I could talk, albeit not very intelligently in my dream state. The shape continued to hover over me, within arm’s reach. I twisted in my covers, attempting to lunge towards my dresser drawer where I kept my gun. As my hand continued to fumble for the dresser knob, coldness brushed against my backside. At that instant, I gave up my hunt for the gun and reverted to my backside, hoping confrontation might keep the invading demon at bay. I shouted. “Back off and identify yourself.” I felt silly. I couldn’t very well command this thing to put its hands behind its back–if it had hands–let alone expect it to adhere to laws and protocols devised by those living in the real world.

The thing, best described as a floating transparent body of liquid, actually started to comply. It reversed itself away from me, about a yard or so. Now it hovered over my Victorian vanity chair. I seriously hoped its liquid makeup wouldn’t drip all over my prized antique. It began to glow blue, probably because it was in the direct path of a moonbeam.

“Now tell me who are you.” Hoarse and raspy, my voice no longer sounded like mine. I tried to recall my vision where I had been speaking to the spirit of Alastair Crowley. My voice had sounded like mine then. In fact, I’d felt no different in that dream state whatsoever; I had classified that experience as a vision. But now, as I sat cowering in my bed, I felt more as if in a dream. I willed my legs to move, but like in a dream, they were uncooperative as if an iron vise was keeping them in place. As I struggled to escape my covers, the thing spoke to me in a whispered voice. Whatever it was, it was now inside my head! 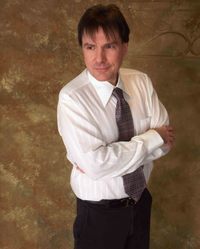 Gary Starta
Author
Gods of the Machines is a sci fi novel for readers who don’t normally read the genre, mixed with romance, mystery, crime and suspense, it is fiction on the fringe of genre. A top ten finalist in 2010’s Preditors and Editors Poll for science fiction, the novel addresses artificial intelligence and the quest to categorize its place in society.
For info visit my website:
http://www.garystarta.net
To follow my sci fi fan page:
http://www.facebook.com/GaryStartaSciFiFanPage
To follow and guest post on my blog:
http://www.networkedblogs.com/blog/gary_startas_writers_blog_a_forum_for_novelists/