A Sneak Peek at The Dream Sifter - Candice Bundy

As promised, now that I have my illustrious Depths of Memory Street Team assembled and on the warpath (okay I don’t have them technically going to war, but they have to wear coordinating face paint at all times) it’s time to share the first chapter of The Dream Sifter.

I hear your cheering in my head, isn’t that nifty? Well let’s call it nifty for the sake of argument. 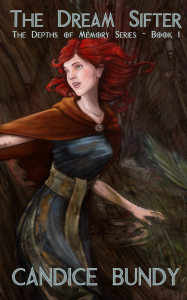 Here’s the Prologue to The Dream Sifter, which releases 8/15/13. I hope you enjoy it, and if you’re interested in joining the DoM Street Team, click-through to read all about it.

Guardian Graeber stood cloaked in the shadows of fading dusk outside the walls of the Zebio Sept’s three-story masonry home. The scanner in his hand indicated the source of his focus resided under this roof. Although the Sept had locked things down like a fortress for their post-dinner meditation, as was proper and correct, the one hazard they could never protect themselves from stood on their doorstep.

Some thanked him. More had cursed him. The hunt used to drive him…yet he cared less and less every day.

Graeber slid the scanner back into place on his belt and pulled a lever next to the door. Chimes echoed within the halls of the Zebio Sept, alerting them to a late caller. The approach of light footfalls echoed from within, and then the harsh slam of the door bolt thrown open no doubt indicated the mood of the person on the other side. The thick, wooden door with its steel reinforced frame swung open.

“I hope your purpose will make up for the timing of this…” the butler’s brusque words fell short. No doubt as he came face to face with a Guardian, the servant’s thoughts drained from his minuscule brain. All Guardians wore distinctive variegated clothing made of perfect tones for blending into the native environment. The overlapping dark blue, green, gray, and brown colors shifted with just the slightest movement of the material. No one would have mistaken him for anything but what he was: an enforcer.

The matching cloak and raised hood obscured Graeber’s face, but there could be no doubt as to his purpose.

“I doubt altering my timing would offer the Sept any degree of solace.” The butler’s face drained of color in reaction to the hard, dispassionate edge in the Guardian’s voice.

“My pardon, Guardian. It’s not my place to interfere.” The butler stepped aside and bowed low, no doubt desperate for the protector’s focus to pass over him. He never asked what this concerned; it could be only one thing. Graeber glided into the house and headed straight for the main hall, knowing the entire Sept assembled there at this hour. The butler closed and bolted the front door before trailing a short distance behind him.

At the end of the corridor Graeber reached an ornate double archway beyond which lay the main hall where the entire extended family consisting of the Sept proper had gathered for their post-dinner meditation.

He knew from his research that Zebio was a mid-sized Sept, consisting of a handful of first-degree children to the Chieftess, her sisters and brothers and their children, and various extended aunts and uncles related by blood or marriage. All of them skilled artisans in the family trade–earthenware, ceramic, and pottery creations.

He cared nothing for their craft, but it helped to study the trade of a given target as it indicated their aptitudes. For instance, potters would be good with their hands and have excellent attention to detail, and could be brawny through the upper body if they worked at the wheel. Therefore today’s target would be a simplistic capture, no strain upon his skills.

Most of the adults within the room sat in chairs, either around tables or in clusters, while others gathered on the floor with children on their laps or leaned up against them. Most of the small ones tried to make an effort at the meditation, but the practice was a learned one, and they were as yet unskilled.

The Az’Un had grown to learn the importance of daily calming exercises for maintaining optimal health, and the members of Zebio Sept appeared to be ardent practitioners.

The butler rubbed his hands together next to him, eyeing the assembled thirty-odd members of the Sept. Then he gulped and took a step back, away from the watchful scrutiny of the Guardian.

Graeber threw back his hood and surveyed the room, testing the undercurrent, prepared in case his prey might attempt to flee.

A collective gasp rippled through the space as the Sept members took in the newcomer–and processed what his arrival–heralded. A few members trembled, some paled, while others slunk down in their seats, as if hiding was even a possibility.

“Who’s that man?” little Solla asked. It took a child’s innocent inquiry to stir a verbal response from the stunned gathering. She didn’t know the impropriety of disturbing the meditation or staring at a Guardian.

“Hush, child,” Chieftess Taura replied, her surprise over the newcomer obvious in the strained lines etched on her face and the sudden taut muscles of her body. She straightened her back in her plush chair and flattened out her skirt before folding her hands in her lap. All of the faces in Zebio Sept turned toward the Guardian. Wide eyes and whispered words bared the naked anxiety of the crowd. Murmurs rose in volume, and mothers cradled their small children to their breasts.

“Silence,” said Chieftess Taura. “Remain still.” She shot a chastising look at the butler, who then took a seat near the hallway.

Even with her shock at this turn of events, Taura wasn’t about to question Graeber or protocol. Her sharp gaze schooled all present, and those who’d moved quickly retreated back to their seats. No one in the Sept would go against his or their Chieftess’ will. “Zebio Sept welcomes your protection, Guardian. Please do what must be done.”

Her tone belied the spoken welcome, but it didn’t concern him. Graeber had a job to do–as long as no one interfered, everything would go smoothly.

Graeber pulled the scanner from his belt again and moved around the room. He touched every person one by one, each flinching at the brief contact. Some burst into quiet sobs at the contact, unable to contain their terror. He paid them no heed, intent only on his quarry.

In this case, the scanner only served to confirm what his honed senses detected in subtle amounts–an off stench he’d come to associate with the plague. After a lifetime scouring the planet for any living thing infested with the abomination, Graeber had to force himself to continue through the entire Sept to make sure he missed nothing.

He finished his circuit of the room and approached Taura, showing her the display on the scanner.

“This one has an active infection.” His deep and steady voice unaffected by the consequences this revelation implied and the emotional havoc it would wreak upon the entire Sept.

Taura’s eyes widened, followed by silent tears as she struggled to keep her composure. “Zebio asks for your help in this matter, Guardian. Please bring cleansing to our family so we may sleep in peace again.”

Taura rose and walked toward one of the windows in the corner and appeared to gaze out upon the street. Facing away from the group Taura’s shoulders shook in silent sobs as her fingers gripped her arms.

“I’m happy to oblige, Chieftess Zebio.” Graeber slid the scanner back into his belt.

As he pulled his hand out of his vest, Graeber grabbed an object from a satchel hanging on his belt. Moving faster than most would be able to track, he spun, flicked his wrist, and let fly a small metal dart at Terem, Taura’s youngest son. The willowy sixteen-year-old cried out as it hit him in the side of the neck with an audible thunk. Terem’s eyes met the Guardians with a shock that morphed into a murderous rage. He tried to stand, to back away, but the tranquilizer’s immediate potency prevented even these simple tasks.

With the Guardian’s target now singled out, everyone shied away from the boy, huddling along the walls and crying even harder. Danger and death marked Terem.

Graeber walked up to the teen with the grace of a predator, not a trace of fear evident in his posture.

“How dare you? I’ve done nothing wrong!” Terem slurred, his words forced out through now uncontrolled lips. He slid flat onto the ground, unable to hold himself upright.

Graeber squatted next to him, contemplating the boy. “Did you think no one would notice? Did you think that you were somehow immune and thus didn’t need the drugs?” he snarled. He plucked the dart from Terem’s neck and slid it into a vest pocket.

Shocked gasps replaced the earlier screams as the Guardian’s admonishment rippled over the assembled family. Terem’s illness wasn’t due to the plague medicinals failing. No–for whatever reason he’d chosen to cease taking them, signing his own death warrant, and placing his entire Sept at risk.

Terem tried to defend himself. He grunted, whined, and shook his head, pleading his case. He looked around the room but the answering gazes from his Sept held no compassion, no sympathy. His betrayal had endangered them all. Guardians didn’t make mistakes, and no one would start questioning them now.

Graeber took out a large black fabric bag and pulled it down over Terem’s head past his midsection. He raised the boy over his shoulder. The body was now simply a limp, anonymous form.

“Your Sept may rest easy now, for no others among you are ill. Dwell in peace.”

He walked from the room and down the hall, not waiting for a response from the shocked family. It took the butler a moment to catch up and he followed along at a respectful distance. Graeber turned as he opened the front door, inclined his head, and then disappeared off into the shadows of night.

Echoing through the streets, he heard the far-off sounds of Taura Zebio mourning her youngest son.

Behind every great quest lies a villain with a pla