My next book, Dreams Manifest, is due out November 1, 2017. Until then you’ll have to be satisfied with this cover and blurb. (If you’re a reviewer, contact me for your complimentary ARC copy!) Here you go, Dreams Manifest, The Depths of Memory, Book 2: 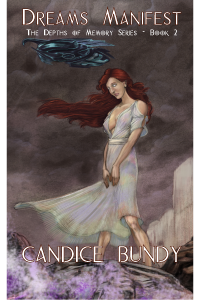 Reeling from the revelations of who she is or was, before her memories were ripped from her, Rai Durmah is faced with a new and more frightening threat. While scouting Az’Unda for potential Juggernaut settlement, Selector Brague of the Hegemony, who can end the human colony on a whim, encounters Rai Durmah and is shocked by her unusual abilities. Rai and her new family flee the scene, but Brague will not rest until he understands how Rai, a human colonist, developed her unique gifts. As she flees, Rai stumbles upon an ancient power that could change the face of Az’Unda and perhaps save the humans that live there.

Caught between her adoptive family who doubts her loyalties, the alien Juggernaut, and a Guardian protector she fears, Rai desperately attempts to escape her pain and unwittingly unearths the answers to solve or destroy Az’Unda’s future.

A distant human colony races to prove themselves before the powerful Hegemonic races declare their attempt a failure. Although they’ve been on Az’Unda for a little over 600 years and have used aggressive breeding practices, a horrible plague has reduced their life spans, left many women sterile, and created heartbreaking husks of the people they once knew and loved, known as Terrors. Little do they know they are about to face their greatest threat from one of their own–causing attention to focus on the ordinary and unremarkable Durmah Sept.

The Depths of Memory Trilogy in a set in a future where humans have fled Earth and struggle to colonize new worlds and prove their worth to the alien consortium known as the Hegemony. Beyond the colonist’s day-to-day struggles, they face a devastating plague which requires extreme and constant vigilance. Faced with internal and external threats, how far will the colonists be willing to go to save not just their colony, but humanity itself?

Genre: The Depths of Memory Trilogy is a sci-fi/fantasy series.