Back in March 2016 I read The Artist’s Way and adopted the practice of daily pages. This is a creativity-expanding and focus-generating habit which has aided my writing practice and productivity in all areas of my life. However, the habit took longer than I’d expected to form, which caused some struggle and self-doubt. After all, doesn’t it just take four months to form a new habit? Why was it harder for me?

I’m going to share with you some beautiful data on my progress as well as some lessons I’ve learned along the way.

I’ve written since my 20’s but didn’t put out my first book until 2010, and my second in 2012 followed by my third in 2013. Now, it’s not at all unusual for new writers to be slow, and I was moving faster than Robert Jordan or George R.R. Martin, so that’s something. However, life threw me some curveballs (the death of my father, divorce, job change) and sidelined my bandwidth for a time. When I tried to get back into my groove, I just couldn’t hit my earlier stride.

Thus entered the journaling habit, specifically daily pages. Now, those of you creatives have undoubtedly heard of this method of daily journaling. It’s life-changing for some, and a dud for others. I’ve found the process to be quite useful, as it’s helped me focus on my goals and more specifically, what I plan to get done every day.

But…this blog isn’t so much about the habit per se but the hacking of habits.

I present the following data, which shows my average words per day and how many days a month I journaled over the past two years. (Yeah, I’m that level of geek.) 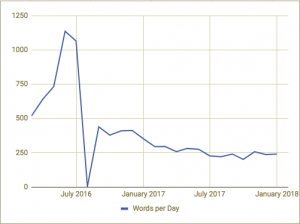 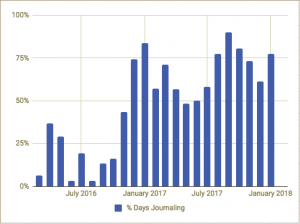 Percent of days journaling per month

(Note: The off month on the left chart is where I had surgery and gave myself a pass.)

What did I learn by charting this data?

After everything I’ve heard about new habits taking four months, this wasn’t true for me. If I’d given up at five months I’d never reached my goal, so remember each individual’s process is unique and different.

Of course, this is just one habit (albeit one that lent itself conveniently to statistical analysis) and every person’s experience adding or shedding habits is unique. What’s been your experience? Are there habits which have been quick and easy to adopt, and if so, to what do you attribute the success?