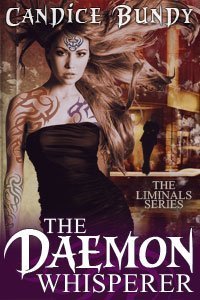 Genre: Dark Fantasy/Paranormal Romance, Content: Contains graphic violence and explicit sexual situations, recommended for readers 18+ If you use Goodreads please consider adding this to your to-read’s list and reviewing it after you’ve read it.

What People are Saying About The Daemon Whisperer

“I am so happy that I had the opportunity to be able to sink my teeth into this new series and author. It was more than I expected and all the elements makes the storyline come together beautifully to create a captivating world.” – Crystal – Redheads Review It Better (redheadsreviewitbetter.blogspot.com)

“I fell in love with this exotic, dystopian world and the humans and daemons that lived in it. The pace of the story is fast and there is never a shortage of action.” –  Rosette  (literatiliteraturelovers.com)

“Daemon Whisperer is a unique mix of dark fantasy and paranormal romance. It’s a mix I don’t often see and I really enjoyed it. The story line was fast paced with a good deal of juicy action. Parts of it were gritty and terrifying while other parts were sweet and romantic.” – Kiersten Fay Author of “Demon Possession”

“In this story of love and survival, Meri and Azimuth are characters that are very easy to follow on their journey and see where it takes them. You will find yourself rooting for them along the way and I kept wondering who was next in the series. … This was a great first story into the world of Liminals and I can’t wait to become even more involved with the next book in the series. — The Paranormal Romance Guilds Review Team

“The best part of the story is its fast pace and slightly twisted storyline; the author does her best to write a story that manages to bridge the storyline from its post-apocalyptic roots into the thriller components of the story. …doesn’t shy away from action and in the latter half of the book we do get some terrific action-oriented proceedings that help in setting up a terrific climax. …a good start to an interesting series and should be a book that should be enjoyable for readers of Nalini Singh and Jeanine Frost.” – Fantasy Book Critic (fantasybookcritic.blogspot.com)

“The originality of The Daemon Whisperer kept me flipping pages and interested enough to pick up book two, The Madness Path, when it’s released.” – Scooper Speaks (scooper.wordpress.com)

Goodreads reviews for The Daemon Whisperer

The Daemon Whisperer on goodreads

This site uses Akismet to reduce spam. Learn how your comment data is processed.